Just Write It Down & Worry About The Rest Later

As the title to this page suggests, I'm just writing it down and I'll worry about the rest later. Or, maybe I won't worry about it. Who knows.

Saturday, Sept 26th, 2020, I was picked up by a friend at a hotel in Portland, Or (more on this hotel at a later date). We had scheduled to get lunch and meet another friend at the Providence Academy in Vancouver, WA. Having some time to kill before grabbing take-out, Sara took me by St. James the Greater Proto-Cathedral.

You may wonder if this was just a site seeing excursion? For my part, it was somewhat, but there was a deeper reason.

The story starts months ago. The very beginning, actually starts several years ago. Again, I will save that for another day.

To get to the core reason I was there that day, please visit Sara's blog, MyWeirdLife.  She is able to tell this crazy story much better than I can. It's a story full of nuns and bricks and a family name called Hidden. 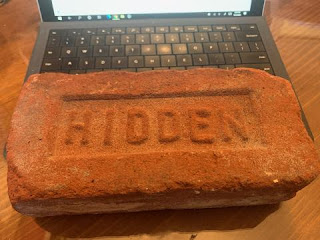 Okay. Back to that Saturday in September.

We walked around the building, unable to get onto the grounds or into the cathedral due to Covid restrictions. Had a nice chat with a parishioner/tour guide who was resting outside and I snapped some photo's. We were then off to pick up lunch & to the Academy to meet Janet.

So what I'm going to do here is share my photo's of that day. I'll fill you in on why I took the ones I did and we'll go from there. Enjoy! 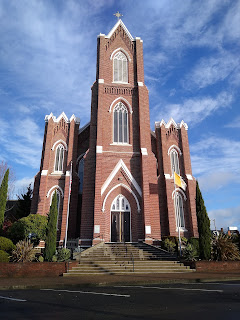 (Photo courtesy of Sara Schick). I was unable to get across the street that day to get a full sized front photo. 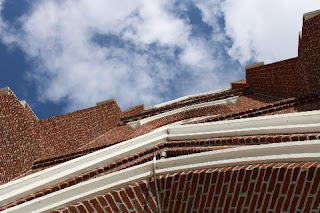 Photo here, was taken directly under the brickwork above the Cathedral doors. The points all line up perfectly. Looking straight up you experience a bit of a shift in equilibrium. I got a little head-rush after taking these.

Lets define a couple of my important words before the next photo.

A remarkable concurrence of events or circumstances without apparent causal connection.

The simultaneous occurrence of events which appear significantly related but have no discernible causal connection. 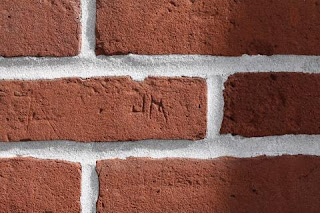 After turning to follow Sara back down the front steps of the Cathedral, I stopped as she was tracing initials that had been carved into the brick there. These initials, carved near the front doors, are the initials of my father and oldest brother...coincidence or synchronicity? 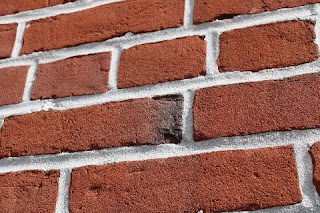 Deep and rich and amazingly uniform in color. The end of this one stood out to me with it's burnt hue. A rich purple before black tone. 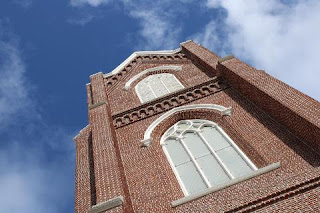 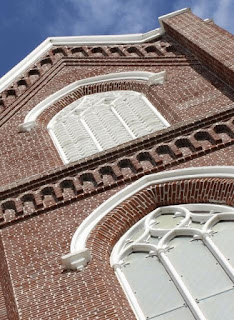 The precision & perfection in the curves. 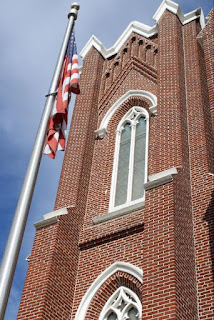 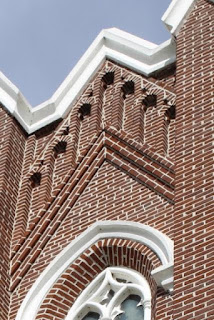 Honestly, a little visually obsessed with that top brickwork here. 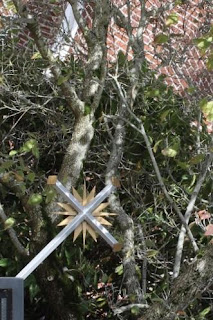 Bricks peaking through at a Glory Cross. 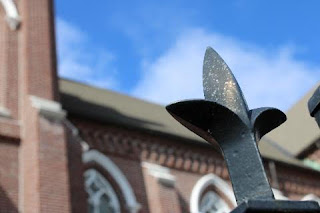 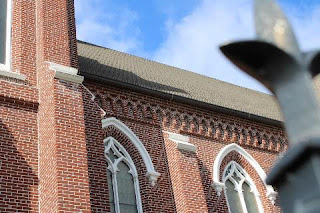 As I mentioned at the top of the page, we were unfortunately not able to visit the grounds of the Cathedral. The entire block being surrounded by a tall, black, iron fence topped with Fleur-de-lis.
(Since France is a historically Catholic nation, the fleur-de-lis became "at one and the same time, religious, political, dynastic, artistic, emblematic, and symbolic," especially in French heraldry. The fleur-de-lis has been used by French royalty and through out history to represent Catholic saints of France) ~Thank you Wikipedia. 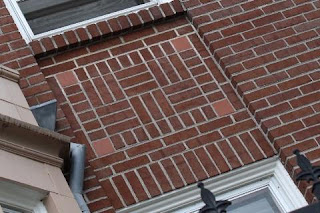 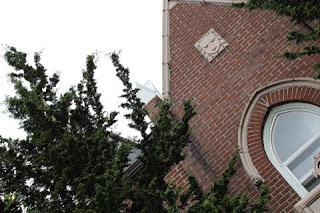 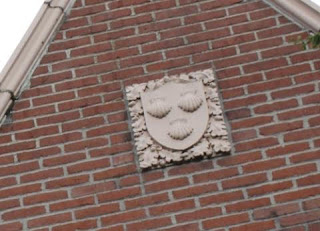 A shield is depicted near the peak of one of the side buildings. Possibly the rectory? A quick google search regarding shields with cockle shells, got me a little info and another borrowed photo. 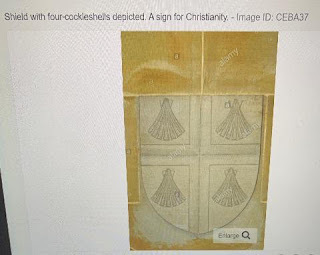 ("Mary, Mary, Quite Contrary" is an English Nursery Rhyme. The rhyme has been seen as having religious and historical significance, but its origins and meaning are disputed.
The most common modern version is:
Mary, Mary, quite contrary,
How does your garden grow?
With silver bells, and cockle shells,
And pretty maids all in a row.
This, the oldest known version , was first published in 1744, with the lyrics, that are shown here:
Mistress Mary, Quite Contrary
How does your garden grow?
With Silver Bells, And Cockle Shells,
And so my garden grows.
Like many nursery rhymes, it has acquired various historical explanations. One theory is that it is religious allegory of Catholicism, with Mary being Mary, the mother of Jesus, bells representing the Sanctus bells, the cockle shells the badges of the pilgrims to the shrine of Saint James in Spain and pretty maids are nuns, but even within this strand of thought there are differences of opinion as to whether it is a lament for the reinstatement of Catholicism or for its persecution.)
So, if you've done your homework and visited Sara's blog here, you may be having a ahh-haa moment. It took me a bit. Something is clicking.
PRETTY MAIDS ARE NUNS. THREE COCKLE SHELLS ON THE SHIELD.                                                    THREE NUNS.
~ Now on to the Oak leaves ~
"...Oak trees symbolize: longevity, humble beginnings, patience, faith, power, endurance, and strength. That's a whole lot of meaning packed into a leaf and seed, isn't it? But that's part of what makes symbols so powerful. " 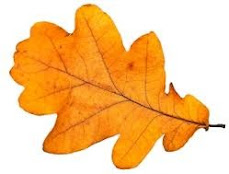 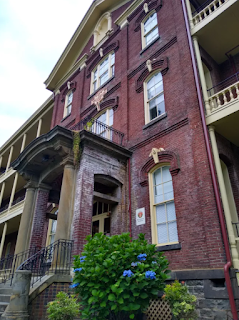 Andrea
Just my rambling on things that I find interesting, odd, and amazing.